Hollywoods new a list the stars getting all the offers

Margot makes an appearance in The Hollywood Reporter’s New A-List as one of the fifteen stars getting “all the offers”.

The Wolf of Wall Street breakout went from relative anonymity to booking gigs opposite Will Smith (February’s Focus), Chris Pine and Chiwetel Ejiofor (Z for Zachariah) and Tina Fey (Fun House). The Aussie then nabbed the role of Jane in Warner Bros.’ Tarzan remake, opposite Alexander Skarsgard, as well as her first superhero gig, playing Harley Quinn in Suicide Squad. 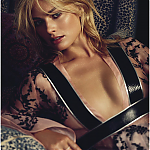 Margot in Who Magazine’s most beauutiful issue Welcome to Margot Robbie Source, the newest and soon to be leading fansite for Margot Robbie! We aim to bring you all of the latest images and news about Margot as well as exclusive information and pictures. Please continue to check back and check out the gallery, which will be growing every single day with new HQ images. Thank you!